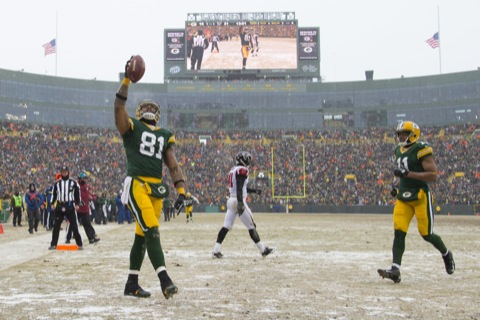 Tight end Andrew Quarless is one of those guys. One of those guys about to hit free agency who we figured the Green Bay Packers would just let sign elsewhere.

Quarless hasn’t been overly impressive since being drafted in the fifth round in 2010. He has been a spot starter however, as Jermichael Finley has missed plenty of time because of one injury or another. Quarless’ best season was this last one, when he started 10 games and came up with 32 catches for 312 yards and two touchdowns.

All of those numbers were career highs, so you see what we’re saying about not overly impressive.

Those numbers may be good enough for the Packers though. The organization has been at least discussing a new deal with the tight end, according to Tom Silverstein.

Quarless’ representative spoke with negotiator Russ Ball at the scouting combine and the two have been in regular contact, How deep their discussions have gone isn’t known and it’s possible Quarless will hit the open market.

If the Packers re-signed Quarless it would almost be as a precaution. Finley is also about to hit free agency, which leaves the Packers with only young/unproven tight ends under contract. Those guys are Ryan Taylor, Brandon Bostick and Jake Stoneburner.

None of them have played a major role on offense at any point in their careers. Bostick has the most potential, but can be a liability as a blocker.

Quarless, on the other hand, is a solid blocker. Although he’s not dynamic in the passing game, he’s certainly serviceable. So why a precaution?

The Packers know they have someone they can turn to if, 1. Finley leaves, 2. they can’t grab a starting-caliber tight end in free agency or the draft, and 3. Bostick or someone else on the roster isn’t ready to start.

That’s a lot of ifs, but all entirely possible.

John Kuhn will be Testing Free Agency as Well