So Julius Peppers Doesn’t Play Hard All the Time 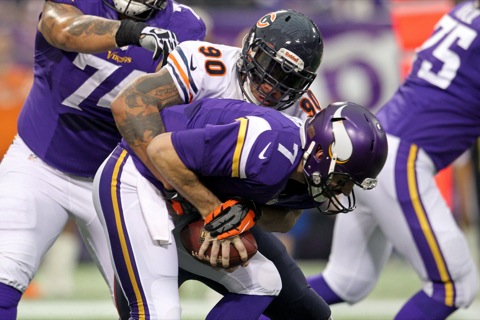 Now, let’s be honest. It’s pretty much impossible to go balls out for every play of an NFL game and not kill yourself. So, you could in fact say no one plays hard all the time. But that hasn’t stopped people from labeling Peppers as a loafer.

Kind of like that POS Albert Haynesworth. All the talent in the world. Too lazy to use it. On a side note, B.J. Raji is starting to inch closer and closer to Haynesworth territory, but that’s a story for another time.

Peppers is undeniably talented. Always has been. The kind of guy you expect to flat out dominate a game. And when he doesn’t do that, well, his effort gets called into question.

All of the Chicago media types and fans have been quick to point to this perceived lack of effort since Peppers signed with the Packers. In fact, CSN’s John Mullin suggests there were people in the Bears organization that didn’t think Peppers was trying either.

What the Bears desperately needed from Peppers was a max-effort every single week to carry a defense that was reeling for virtually the entire second half of the season. They didn’t get it. It simply wasn’t there — for whatever reason, or reasons — and suddenly, like it or not, Peppers had gone from a linchpin of a defense to a player not to be counted on every week. A paragon of consistency was all of a sudden precisely the opposite.

The suggestion here is the Bears couldn’t count on Peppers. We’d suggest maybe he didn’t play hard all the time because he played for the Bears and knew those clowns weren’t going anywhere.

Not that that’s an excuse. They paid him handsomely and you’d think the guy would have enough pride to show up every week.

The question is whether Peppers will show up to ball with the Packers because no one gives a shit about what happened with the Bears. We say he will, at least most of the time.

Peppers picked a great situation for himself. He’ll be put in a position to make enough plays this season. If he doesn’t do anything in these opportune conditions, then we’ll question his effort.