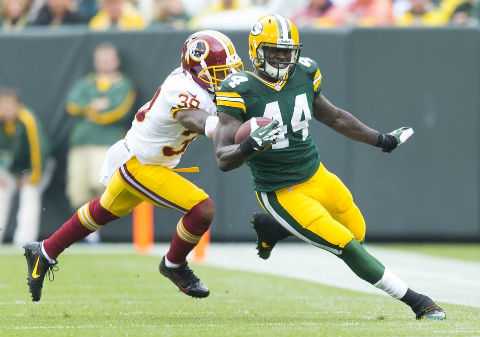 Stop us if you’re heard this one before. The Green Bay Packers are going to re-sign one of their own free agents and the deal is considered imminent. Yeah… Anyway, the Packers will be re-signing running back James Starks, according to Adam Schefter.

That’s great news for the Packers, but probably not so great news for a number of other guys, including Starks. He’s obviously decided he’s fine with playing second fiddle to Eddie Lacy, at least for the next two years.

It seemed like there would be a decent chance Starks would get a shot to start somewhere this offseason. That didn’t happen. The Steelers were the only team to schedule a visit with Starks and he would of had to back up Le’Veon Bell there. Ultimately, he decided not to even make the trip.

The other guys who probably aren’t ecstatic are Johnathan Franklin and DuJuan Harris. After Lacy and Starks get their carries, these two guys are probably going to have to fight over a touch or two per game.

That is, if they’re all on the roster. The Packers are overloaded at running back. Unless someone gets hurt, the Packers virtually have to trade one of these guys.

Good problem to have, though.