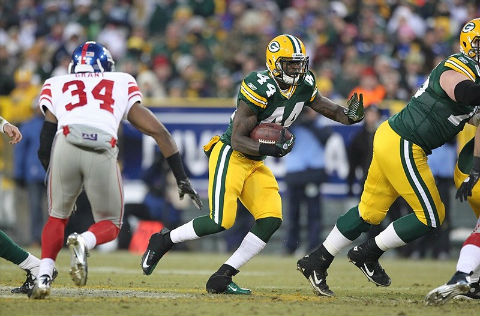 The Green Bay Packers re-signed running back James Starks to a two-year deal worth a little over $3 million earlier this week. In the process, they made something pretty clear — Starks is the man.

The man behind Eddie Lacy, anyway.

Lacy is obviously the clear-cut No. 1 back for the Packers after racking up more than 1,200 yards during his rookie season. Starks had his best statistical season as a pro in 2013, rushing for 493 yards while averaging a gaudy 5.5 yards per carry.

And why wouldn’t you want a guy like that as your No. 2 back?

Well, because you don’t need him. We were sure the Packers would let Starks sign elsewhere in free agency. We were also sure Starks would want to go somewhere where he had the chance to get more carries, if not start.

Maybe that opportunity never presented itself for Starks. But for the Packers, running back is one of their deepest positions with or without Starks.

The Packers have 2013 fourth-round pick Johnathan Franklin and former starter DuJuan Harris waiting in the wings. They could have saved some money instead of paying Starks and been just fine.

Now, those other two guys have to wonder when or if they’re going to get a shot. The pecking order has been set — Lacy, Starks, everyone else.

Our bet is one or both of those guys are going to end up getting their shot on another club.