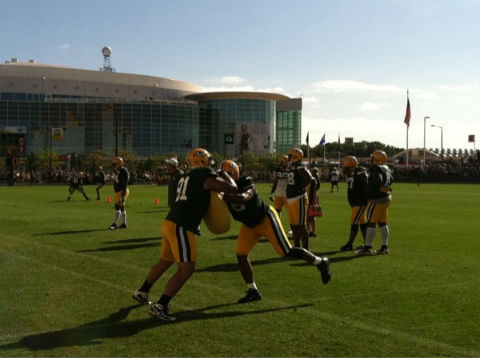 The NFL offseason is about to kick into high gear. Here are the dates you need to know.

March 3rd — All NFL teams intending to use their franchise or transition tag — yes, such a thing apparently still exists — had to use it by 4:00 p.m. EST.

As expected, the Green Bay Packers did not use either of their tags. The calculus on this is pretty simple. If the tag would mean paying the player more than the market would, you don’t use it.

The trend in recent years is that fewer and fewer teams have been using the tags. Wanting multi-year deals, mostly for the guaranteed money that comes with them, players generally do not appreciate getting tagged. Clubs typically don’t like to annoy the very players they want to keep around. Also, in the last couple offseasons, there have been so many free agents available on the market that the market gets depressed, reducing the size of contracts. This means most of the tags are currently overpriced.

March 8th — All clubs are allowed to contact agents and enter into negotiations with any unrestricted free agent whose contract is about to expire. No signings are allowed until the opening of free agency, however.

March 11th — This is the biggest day of the offseason before the draft. At 4:00 p.m. EST on this day, the NFL league year ends.

All 32 clubs must be under the 2014 salary cap by this time or face penalties, which may include the forfeiture of draft picks. That means that the week leading up to this date, or this week,  is when those teams above the cap cut players and renegotiate contracts in order to get under the cap.

All restricted free agent tenders must be offered by this time. The Packers are not expected to tender anyone this offseason, though linebacker Jamari Lattimore is a candidate for a minimum tender.

Any player whose final contracted year is 2013 becomes a free agent after 4:00 p.m. EST on this date. Free agency begins, and any player without a contract is now allowed to sign with any club making an offer.

March 23rd — NFL owners meet in Orlando to offer hot tub parties to college hotties, of either sex, on spring break… errr… discuss ways to disfigure the game more than they already have.

April 7th — Those clubs with a new head coach, i.e. the Vikings and Lions, may begin their offseason program.

April 21st — Those clubs with a returning coach, i.e. the Packers and Bears, may begin their offseason program.

The Packers have not yet announced all the dates for their offseason program. Usually, they announce the full schedule after the draft.

May 19th — This is the date of the NFL owners’ spring meeting. This is when rule changes for the following season are typically voted upon. Rule changes being considered for the coming season include moving back the PAT, creating a more centralized system for instant replay, and everyone’s favorite — more penalties for touching a player in the head/neck area.

Typically, the Packers have their first rookie minicamp around the second week of May with veterans reporting during the third week. Now that the draft has been backed up into May, that schedule may be pushed back a couple weeks. I expect the final mandatory minicamp to still be the first or second week of June. Players then usually have around six weeks off before training camp begins the final week of July.