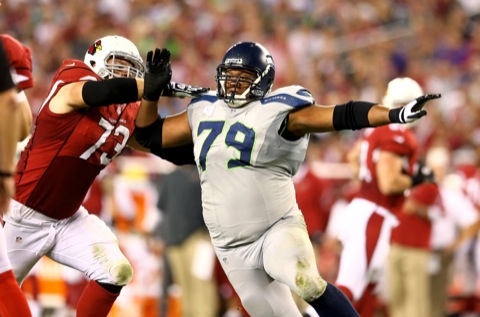 Throw some defensive linemen against the wall and see what sticks. Wait, maybe I’m thinking about something else. At any rate, the Green Bay Packers are looking at pretty much every defensive lineman on the market. Red Bryant was one of those guys.

We say was because he signed with the Jacksonville Jaguars on Saturday.

Bryant, who was cut by the Seattle Seahawks on February 28 in a salary-cap move, was scheduled to visit the Packers on Sunday.

Massive DE Red Bryant said today that he was to visit #Packers (Sun) & KC (Mon) before he decided Fri to go with Jax (4 yrs, $17M), Bradley.

The 30-year-old Bryant has been a starter at defensive end for the past three seasons in Seattle, where he was known primarily as a run-stopper. As you well know, the Packers could use one of those. Well, they could use like five actually, but one is a start.

Bryant is a big boy at 6-5, 326 and could have been an option to take over the nose tackle position in the Packers’ 3-4. If the Packers had been able to sign Bryant, they wouldn’t really need to re-sign B.J. Raji. Because hey, now we have a fat ass who will actually bother to try and stop the run!

Not to be, though. Bryant got four years and $17 million from Jacksonville.

You’re probably wondering why anyone would want to sign with the Jaguars unless their offer was like three times what everyone else’s was. The obvious answer is Jags coach Gus Bradley.

He was Seattle’s defensive coordinator from 2009-12.