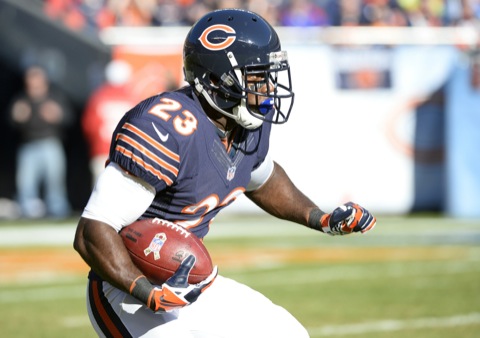 So good old Rob Demovsky tells us that the Green Bay Packers could be interested in Devin Hester.

You’ll probably remember him as the Chicago Bears return man who made the Packers look like a collection of bumbling idiots from time to time. Well, the Bears won’t be having him back and no one else has scooped Hester up yet.

That’s probably because he’s seeking around $4 million per season. Now, that would be fine if Hester was a legit NFL receiver in addition to being an all-time great returner. However, he is not. Never has been. Never will be.

Dude can run fast in a straight line and that’s about it. So, being that he’s a 31-year-old one-dimensional player, Hester’s price probably needs to drop a bit. And if it does, Demovsky tells us the Packers might take a look.

You’re probably saying, “But we already have one former washed-up Bear, why do we need another?” A fine question!

It’s not that the Packers need another Chicago castoff, it’s that they need a boss return man and Hester is definitely still that.

The Packers were good enough on punt returns, with Micah Hyde averaging 12.3 per. They were, however, awful on kick returns. The Packers averaged 20.3 per kick return, which was third worst in the NFL.

So one, Hester immediately improves those areas. Two, he also protects two key players by taking over their return duties.

Randall Cobb, the best return man currently on the Packers roster, is going to be an offensive focal point in 2014. Meanwhile, Hyde is going to have an expanded role on defense. Why would the Packers want to risk them on returns?

They wouldn’t, unless they have to.

Three, you don’t have to worry about Hester the same way. The guy will not play a significant role on offense. He’s just a returner, so you turn him loose on returns.

So yeah, we’ll take Devin Hester in Green Bay. Certainly not at $4 million per season, but we’d be happy to have him at half that.