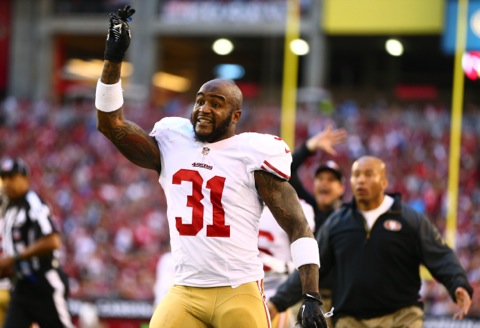 It’s that time of year. The time of year when media types start speculating wildly about where free agents will land. So here’s one for you — the Green Bay Packers will sign 49ers safety Donte Whitner.

That’s what USA Today’s Nate Davis suggests in his list of the top free agents.

Another dog of a player — that’s a compliment in the NFL — who could provide the veteran leadership for a team that needs an injection of attitude.

We all know the Packers safeties suck and the organization needs to do something to upgrade the position. We included Whitner on our list of top free agent safeties. We had him ranked behind Buffalo’s Jairus Byrd, Cleveland’s T.J. Ward, Indianapolis’ Antoine Bethea and the Giants’ Stevie Johnson. However, you could certainly make an argument that he’s the third best option of the group behind Byrd and Ward.

That suggests Whitner isn’t going to command huge money like Byrd is. And that means the Packers might actually have a shot of signing him. You know, at least until they insult him with some low-ball offer and he goes elsewhere for a perfectly reasonable contract.

Unlike the Packers, who have ample salary cap space, the 49ers currently have just around $6.7 million. That would suggest they’ll likely have to let Whitner walk.

Previous Article
Packers: No Issue with Michael Sam or Any Other Gay Player
Next Article
Jim Leonard wants to Play for the Green Bay Packers