There’s a Cheesehead at the Sochi Olympics 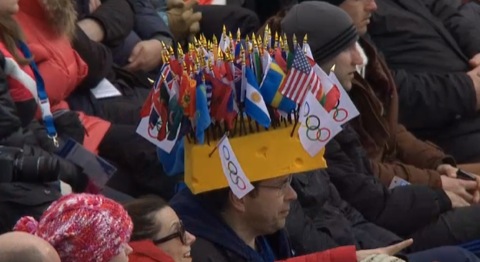 The Olympics are great and all, but it totally sucks when you can’t watch them live and have to deal with NBC’s tape delay and Bob Costas’ ever-expanding pink eye, which is what we’re getting with the Sochi games.

It’s worse if you’re on the west coast because they don’t start airing stuff until 8 p.m. So, it’s like, “Oh, let’s watch Shaun White win the half pipe.” Well, unless you had your head buried up your ass all day, you already knew he didn’t medal well before the event was televised.

That pretty much sucks all the fun right out of watching it.

So probably the only viable solutions to this problem are to watch some online feed or to go to the games in Russia. Obviously, that’s what this dude decided to do. And thankfully he brought his trusty cheesehead with him so that he could scream to everyone around him, “I”M FROM FUCKING WISCONSIN!” without saying a damn word.

We’ll assume he’s a Green Bay Packers fan because, well, that’s what we do. Make assumptions.

He’s also apparently a fan of every single country competing in the games. Or at least that’s what all those flags indicate to us.

At least he’s got the Stars and Stripes front and center.

Previous Article
Report: Green Bay Packers will be Players in Free Agency
Next Article
Packers will Try to Turn Raymond Webber Into a Tight End