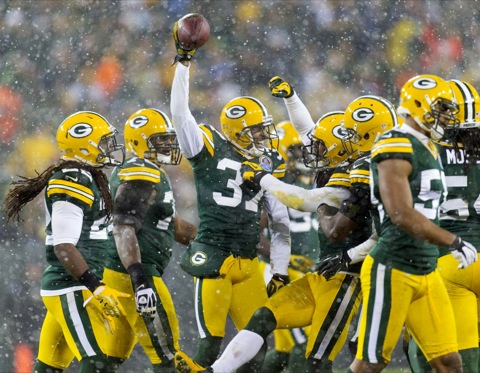 We know the Green Bay Packers want cornerback Sam Shields back and we’ve been wondering what the holdup is.

Tom Silverstein says Shields is indeed on the low end.

…a source familiar with [Shields’ agent Drew] Rosenhaus said the basis for the deal Shields wants is the four-year, $22.4 million contract Chicago Bears cornerback Tim Jennings signed in January. More than half of Jennings’ deal is guaranteed and the first-year compensation is more than $8 million.

So that’s good news for the Packers because they certainly can’t afford to pay two cornerbacks No. 1 cornerback money.

The argument against giving Shields Jennings-type money is that he hasn’t made a Pro Bowl, while Jennings has made two. We’re sure the Packers are using that as an argument to get Shields’ annual salary lower.

The argument rings hollow to us — and probably Shields and Rosenhaus — when you consider the extension safety Morgan Burnett and his zero Pro Bowls got last offseason. That deal averages a little more than $5.2 million annually.

Who wants to bet Ted Thompson wishes he would have given that money to Shields instead of Burnett last year?

Anyway, we expect Shields’ deal to get done. What he’s asking for isn’t outrageous, providing Silverstein’s source is correct. Neither are the parameters of the deal. When you factor in the signing bonus, which is spread evenly over the length of the contract for salary cap purposes, $8 million up front is very doable.

Remember, the Packers have close to $30 million in salary cap space and they won’t be wasting a big chunk of it on re-signing B.J. Raji.

So let’s make it happen.