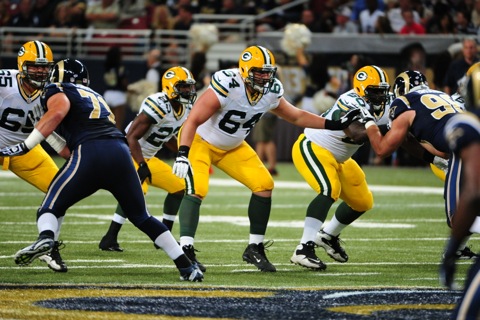 It’s that time of year. The time when Ted Thompson unceremoniously axes guys from the Green Bay Packers’ roster. The first guy to go this year is backup offensive lineman Greg Van Roten.

Van Roten spent most of the 2013 season on injured reserve after suffering a foot injury in early October. In all, Van Roten appeared in 12 games over two seasons with the Packers. Most of that time was spent on special teams.

Van Roten, who was originally signed as an undrafted free agent out of Penn, totaled only 22 offensive snaps in those two seasons.

A move like this shouldn’t come as a surprise, although it usually does anyway. Van Roten was a bottom-of-the-roster guy. He wasn’t ever going to fight his way into the starting lineup and apparently the Packers had seen enough to know he wasn’t going to turn into a solid NFL backup either.

Still, what does it hurt to take a young guy — Van Roten is 23 — to training camp and see what happens? It’s not like this move impacted the salary cap in any way.

Anyway, Van Roten himself was clearly more surprised by the move than we were.

Thank you Packer Nation for treating me so well during my time in Green Bay! A bitter and sudden ending but a memorable journey nonetheless

Rumor has it the Minnesota Vikings were on the phone with Van Roten’s agent as soon as they heard the news.

Jim Leonard wants to Play for the Green Bay Packers