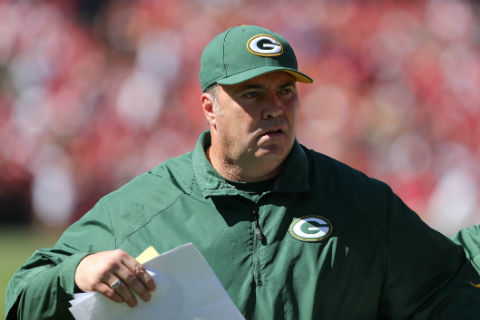 We suggested this was the way for the Green Bay Packers to go — draft a quarterback before the seventh round in order to solidify the backup job for a number of years. Mike McCarthy suggested that’s exactly what the Packers will do, on Friday.

“I think we definitely need four so I’m hopeful that we can get a young guy in the draft,” McCarthy said. “That’s something we’re looking at and maybe taking even a harder look this year — well, that’s not true, we’ve always taken a hard look. That’s something that we’re focused on. We’ll see how that unfolds.”

If you want to read between the lines even further, McCarthy also seems to be suggesting the Packers will re-sign free agent Matt Flynn. He would be the fourth, joining Aaron Rodgers, Scott Tolzien and a draft pick.

Flynn played well for the Packers in relief of Rodgers in 2013, but he hasn’t played well in three other NFL stops between tenures in Green Bay. Whether that means Flynn can only succeed in the Packers’ system is open for debate, but it almost certainly means there won’t be a lot of teams clamoring for Flynn’s services when free agency opens.

As for the backup position, the Packers haven’t had a young guy who actually gives the team a chance to win since Flynn’s first go-round in Green Bay.

Both Graham Harrell, a street free agent, and B.J. Coleman, a seventh-round draft pick, fizzled when given the chance to be Rodgers’ caddy.

But that’s what you get when you’re playing with quarterbacks no one else wants. This time around, if the Packers are wise, they’ll use a mid-round pick and get a guy to solidify the position for the next four years.

B.J. Raji and Ryan Pickett are Good as Gone