Mike Ditka Does Not Like Matthew Stafford’s Frat Boy Image 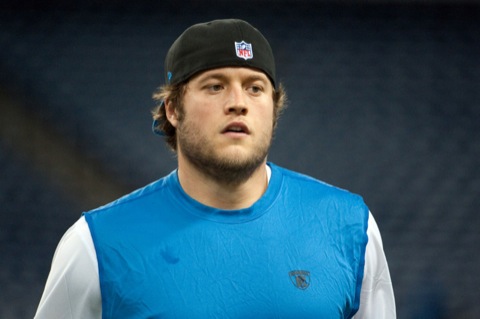 ESPN analyst and former Chicago Bears skipper Mike Ditka did an interview with the Detroit Free Press about the Detroit Lions that was published today. What were we able to take away from that? Quarterback Matthew Stafford needs to stop wearing his ball cap backwards.

Then he pretty much ripped him for looking like a frat boy all the time with his stupid-ass backwards baseball cap.

“I think he can make all the throws. He’s a smart kid. I wish he’d put the baseball cap on frontwards instead of backwards all the time.”

“If you’re the leader of the football team, I think you’ve got to stand up and be that leader, assume that role,” Ditka said. “A lot of it is what you do on the field, certainly. But I think a little of it has to do with appearance, too. You know, respect the game, respect your team. That’s all.

“I’m not knocking him. I’m just saying that’s the first thing I would tell him if I inherited him. When you’re going to go do an interview, put it on like it’s supposed to be on, not backwards, sidewards, whatever way they put them on anymore.”

We get what Ditka is saying here. If you’re going to be the leader of the team, then purvey the image of a leader. You could say Dallas quarterback Tony Romo and 49ers quarterback Colin Kaepernick fall short in that area too.

Of course, Stafford takes the whole frat boy image to another level. There’s his fake-fitted girlfriend and the yearly boat parties where they do keg stands and slam shots.

Perfect quarterback for the Detroit Lions, isn’t he?