Micah Hyde Could Be the Answer for Packers at Safety 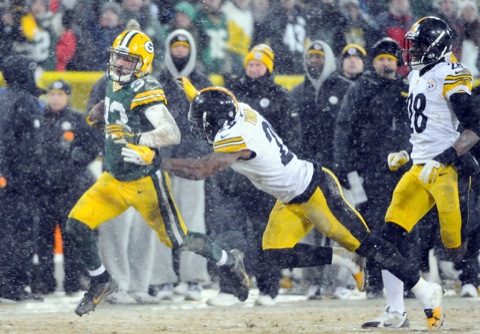 The Green Bay Packers will be upgrading their safety position one way or another this offseason. One potential candidate to do that is already on the roster. He’s cornerback Micah Hyde.

Now, we still believe the Packers will end up drafting a safety, but what if they can’t get a guy they like early on? What if they draft a guy and he isn’t ready step in and start as a rookie? Hell, what if he’s Jerron McMillian all over again?

Well, Hyde looks like the Packers’ contingency plan. There have been more and more rumors emanating from 1265 that the Packers are or will consider moving Hyde to safety. A number of scouts have suggested he’s a better fit for that position, both when he entered the draft and this offseason.

Hyde showed he can cover during his rookie season. He’s a decent blitzer as well. And while he missed his share of tackles last season, Hyde is definitely an upgrade in that department over M.D. Jennings (and maybe even Morgan Burnett for that matter).

At this point, it isn’t really a question of whether Hyde can play safety. It’s more a question about the cornerback group, namely the future of Sam Shields.

Shields is an unrestricted free agent. If the Packers re-sign him, they’ll have a group of Shields, Tramon Williams, Casey Hayward and Davon House at corner.

With those four guys, the Packers don’t need to keep Hyde at cornerback. If Shields signs elsewhere, they probably do. If Hyde is moved to safety and Shields is playing elsewhere, that makes Jarrett Bush the No. 4 cornerback.

Although Bush has improved dramatically in coverage over the years, the Packers would probably prefer House remained in that No. 4 cornerback role.

The good news here is the Packers have some options, largely thanks to the fact they have so many decent corners.