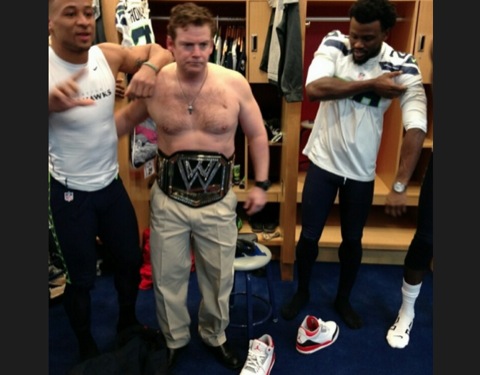 Then he went and assembled his own Super Bowl champion. He celebrated like a champion too.

Safety Early Thomas briefly posted this picture of a shirtless Schneider wearing a WWE championship belt in the locker room after the Seahawks win last night. He later removed it, but then some hack from SB Nation reposted it.

As a side note, Packers linebacker Clay Matthews was the first to debut the championship belt after a Super Bowl. He gave it to Aaron Rodgers in 2011.

That’s not the point here, though.

Could you imagine Big Ted doing something like this? Or would you even want to?

Yeah, think about that the rest of the day — a shirtless, title-belt wearing Ted Thompson has been seared into your brain!

Here’s How to Build a Roster in Today’s NFL, Ted

Here's How to Build a Roster in Today's NFL, Ted