Jim Leonard wants to Play for the Green Bay Packers 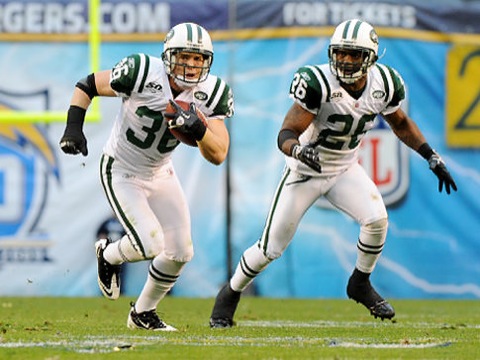 The guy was a walk-on for the Badgers from tiny Ladysmith, Wisconsin. He went on to become a starting safety, tie the Badgers record for interceptions in a career, set the Big 10 record for most punt return yards (since broken) and earn first-team All Big 10 honors three times.

That’s a big-ass can of can-do!

Leonard has been a journeyman in the NFL since he entered the league in 2005, logging stints with five teams. He’s had some decent seasons, though nothing mind-blowingly outstanding. Filling in for an injured Jairus Byrd in 2013, Leonard recorded a career-high four interceptions while starting seven games for Buffalo.

He’ll be a free agent next month and, of course, he’d love to come home and play for the Green Bay Packers.

“I’d obviously love to come back to Green Bay and play for the hometown fans. That would make a lot of people happy, a lot of my family happy,” Leonard told ESPN Wisconsin’s Zach Heilprin. “They wouldn’t be quite as conflicted having to cheer for some teams that they maybe rather wouldn’t but you never know. Obviously there’s got to be mutual interest on both ends.”

At 31, Leonard wouldn’t be a guy you’d bring in to start (although we can pretty much guarantee you he’s better than M.D. Jennings). He’d be a veteran insurance policy, much like he was for Buffalo last season.

Could the Packers use someone like that? It certainly couldn’t hurt. There’s zero leadership on the defense outside of Johnny Jolly and he’s a free agent. On top of that, Leonard isn’t going to get anything more than the veteran’s minimum and you know Ted Thompson loves lowballing the hell out of free agents.

So why not sign Leonard on the cheap and let him come into training camp and try to win a roster spot?