Hooray! The Metrodome Blew Up Yesterday 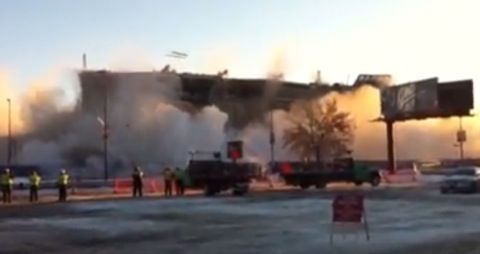 The Metrodome, that inflated pile of shit the Minnesota Vikings played in, breathed its last breathe on Sunday.

While the roof was deflated once the latest lackluster Vikings’ season was over, the real tear down took a little more time. It also took some explosives.

In this video, you’ll see one of the controlled explosions that turned the Metrodome to rubble. Unfortunately, the Vikings or team management were not in the stadium at the time.

Just think, they could have taken care of two atrocities at once. One is better that none, though. Unless we’re talking about a venereal disease.

This was shot from across the street in a church parking lot. The dude shooting it is impressed by the awesomeness of the destruction.

More impressed than he’s ever been watching the Vikings play.

As you probably already know, the Vikings will be moving into TCF Bank Stadium for two seasons while their new home, The Hormel Chili Dome, is built.

TCF Bank Stadium is where the Minnesota Golden Gophers, the only halfway decent football team in Minneapolis, plays.

Now, please enjoy the destruction of this blight on the landscape.

Previous Article
James Jones Won’t Be Back with the Packers
Next Article
The Story Behind Our New Site, Today in Green Bay Packers History