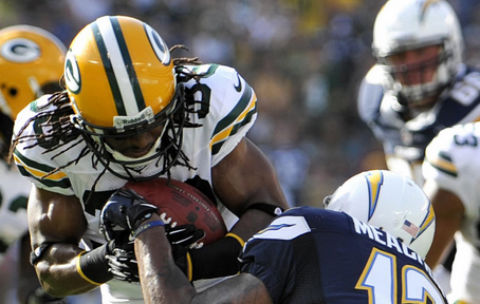 As The Dude would say, there’s a lotta ins, lotta outs, lotta what-have-you’s with the Green Bay Packers cornerbacks. However things end up working out, we still see this group as a strength.

At the moment, the wild card is Sam Shields. If the Packers are able to re-sign Shields, they can pair him with Tramon Williams on the outside. Shields was a borderline shutdown corner in 2013 and after a slow start, Williams came on as the Packers best defender down the stretch.

In that scenario, the Packers have a legitimate problem in the slot. Do they play Casey Hayward, who missed most of 2013 with a hamstring injury, but led the Packers with six picks in 2012? Or do they play Micah Hyde, who more than earned his playing time as a rookie? Then there’s Davon House, who was a regular in the nickel and dime in 2013.

With those last four guys we mentioned, the Packers have four legit corners with or without Shields. We know the Packers want to re-sign Shields and it makes sense for them to do so with three guys entering their contract year.

If they’re able to, the Packers could move Hyde to safety and go with a top four of Shields, Williams, Hayward and House at cornerback.

We haven’t even mentioned Jarrett Bush. He doesn’t have the tools the other guys have, but he’s gone from a liability early in his career to a solid contributor. You could certainly do a lot worse than Bush as your dime cornerback.