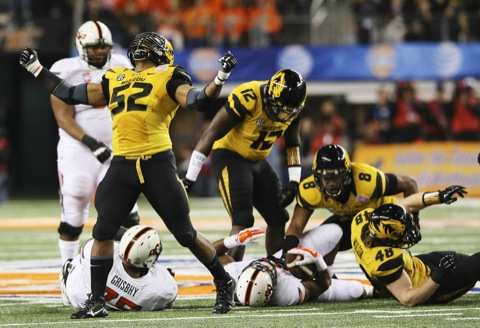 If you didn’t pay any attention to football — or sports in general — this past weekend then you probably missed this, uh…. bombshell? Missouri defense end Michael Sam is about to be the first openly gay NFL player.

Sam is the reigning SEC defensive player of the year and is (or was) projected to be a mid-to-late round pick in this year’s NFL draft. And while his college teammates knew he was gay, he’s now admitted it publicly, so the rest of the world knows too.

So where do the Green Bay Packers fit in? We’ll get to that in a second. First, the reaction.

Most former and current players have been supportive of Sam. Here’s an example from Tom Crabtree.

Good for Michael Sam. Takes courage for where he is in his career and where we are as a league. I applaud him.

Then there’s the other side to this. While we haven’t seen many people be overly hateful and ignorant, a bunch of anonymous NFL sources told SI the announcement will hurt Sam’s draft stock.

Oh, and some questioned how Sam’s sexual orientation would affect the locker room.

“There are guys in locker rooms that maturity-wise cannot handle it or deal with the thought of that,” the assistant coach said. “There’s nothing more sensitive than the heartbeat of the locker room. If you knowingly bring someone in there with that sexual orientation, how are the other guys going to deal with it? It’s going to be a big distraction. That’s the reality. It shouldn’t be, but it will be.”

That whole statement makes no sense. So you’re telling us Sam was in a college locker room this past season with a bunch of guys who should be less mature than their NFL counterparts and they all knew he was gay? And those kids can handle a gay teammate, but guys who get paid to play football professionally can’t?

Right. Have I mentioned that every single source was quoted anonymously in this story?

So now, here’s where the Packers come in. An anonymous former general manager said only a certain number of teams could deal with Sam’s presence. That team would have to have a strong owner, savvy general manager and veteran coach.

In other words, a team like the Green Bay Packers. ESPN Milwaukee’s Jason Wilde seems to agree with that assessment.

Could #Packers draft Michael Sam and make him an OLB in the 3-4? That locker room/organization could handle attention story would generate.

Here’s where we get down to brass tacks. Ultimately, who gives a shit about sexuality in this instance? If you can play football, then then you’re welcome on my team.

That’s really the biggest question about Sam, as Wilde alluded to. Can he play football on the NFL level? Even though he was the SEC defensive player of the year, Sam has some question marks.

First, he’s a tweener. He played defensive end for Mizzou at 260 pounds. If he were to play for the Packers, he’d obviously have to switch to outside linebacker. That makes him a project not unlike Mike Neal, who converted from defensive end prior to the 2013 season.

Second, Sam had 11.5 sacks and 19 tackles for loss in 2013. Those stats look pretty impressive on the surface, but when you dig a little deeper, they’re somewhat misleading. Nine of Sam’s sacks came in three games — against Florida, Arkansas State and Vanderbilt.

Sam is going to have to perform well at the combine and in individual workouts to show he belongs. And that has nothing to do with sexuality. It has to do with football.

Here’s Some Speculation About John Schneider Coming Back