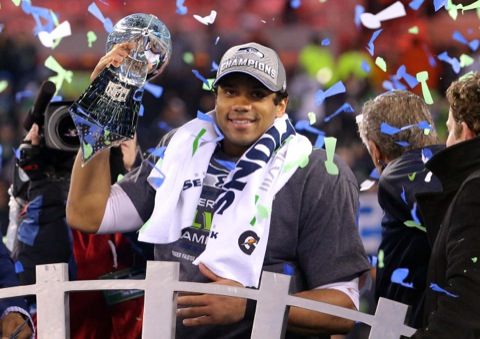 Well who the hell saw that coming? No one here, that’s for sure. That was a goddam whitewashing pretty much from the start. Super Bowl XLVIII is in the books and the Seattle Seahawks pounded the Denver Broncos 43-8.

First of all, let us say congratulations to Wisconsin Badgers legend Russell Wilson. We’re happy for that dude. Now, here are five things we took away from the game.

There goes that big-game legacy
So I picked Denver to win the game. I thought they had too many receiving weapons and Peyton Manning would make checks at the line to hit the open guy. He was playing too well not to have a great game. Well, wrong! In each previous week that Denver played a playoff game I pointed out that Manning wasn’t a big game quarterback. I pointed out that he was a mere 1-1 in Super Bowls and that he had an overall playoff record hovering around .500. Then I went and picked his team in the big game. What did he do? Nothing. Manning is now 1-2 in Super Bowls and he just surpassed one Brett Lorenzo Favre for the most losses by a quarterback in playoff history with 12. Give me Joe Montana at quarterback any damn day.

Omaha?
Speaking of Manning, where the hell were all those checks he was making in the earlier rounds? How many times did you hear Manning yell Omaha during the playoffs and change the play at the line to exploit the defense? More than you wanted to. How many times did he do that on Sunday? None that I recall.

Percy Harvin is a game-changer
While I was thinking of picking Seattle to win the game I though, yeah, their defense. I also thought receiver/returner Percy Harvin was an X-factor. He only played in one game for Seattle all season and he didn’t even finish it. That is, until the Super Bowl when Harvin was indeed the X-factor. He had 45 yards rushing, 5 receiving and 87 on one kick return, which went to the house. That’s 137 total yards. He had a decent case for MVP, but I understand why they gave it to linebacker Malcolm Smith. He had 10 tackles, knocked down a pass and returned a pick for a touchdown.

Speaking of game-changers
You could also make an argument for Seattle cornerback Richard Sherman as MVP. Yeah, he only had three tackles and one pass knocked down. He also left the game early with an ankle injury. That being said, was there one guy on the field who altered the game more than Sherman?

Those creeps can roll
And they’re going to be able to roll for a while. That is, the Seattle Seahawks. They’re the youngest team, by average age, ever to win a Super Bowl. If they can keep their nucleus together, they’re going to be good for a long time. And to think, people used to say that about the Green Bay Packers. On another note, it’s tough to repeat. You can go ask the 2011 Green Bay Packers who rolled through the regular season at 15-1 and then lost their first playoff game.