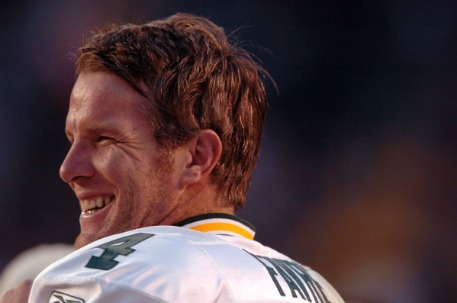 Part of the narrative of Super Bowl week has been that Peyton Manning isn’t among the greatest quarterbacks ever because he’s only won one Super Bowl. You know who can relate? Brett Favre.

Despite playing 20 years and holding all of the major career passing marks, Favre won just one Super Bowl, following the 1996 season when the Green Bay Packers beat the New England Patriots.

Manning’s only win was following the 2006 season when the Indianapolis Colts beat the Chicago Bears (the Rex Grossman-led Chicago Bears).

Both players are 1-1 in the big game.

While Manning has been in the best-ever conversation, you never hear Favre’s name, despite his accomplishments. You hear Joe Montana, Tom Brady, Johnny Unitas and John Elway (who lost three Super Bowls, by the way).

“I kind of laugh at that really,” Favre told USA TODAY Sports. “I heard the same thing in my career.

“Statistically speaking, if you’re middle of the road and won a lot of Super Bowls, it does a lot for you. But not as much if you win (just) one (Super Bowl) and put up big numbers.”

Manning can cement his place among the all-time greats if he wins on Sunday. The question really goes beyond winning Super Bowls, though. At least up to this point.

As we like to point out, Manning has choked a lot of times in the playoffs. That’s something else Favre is probably familiar with.

Favre was 13-11 in the postseason. Manning is 11-11. If he loses on Sunday, he’d be the sole owner of the most playoff losses by a quarterback in NFL history.

So, as you can see, not exactly clutch when it really counts.

Of course, a second Super Bowl win will make everyone forget that. Just like they forget that Elway lost in his first three tries. He only won when he had Terrell Davis.