Young Colin Kaepernick Wanted to Play for the Packers

Or the San Francisco 49ers… Yeah, we’ve mentioned this before. 49ers’ quarterback Colin Kaepernick is from Wisconsin.

Born in Milwaukee. Grew up a Green Bay Packers fan. Got shit for wearing a Milwaukee Brewers cap during an interview in the midst of the playoffs last year.

Somehow, despite all that, we can’t help but dislike the guy.

Maybe, if he’d just lose to the Packers in the playoffs like he’s supposed to, then everything would change. Unfortunately, the guy likes to torment us.

Anyway, as you might expect, young Kap was a Packers fan growing up in Milwaukee. He even wrote a letter to his older self.

It lays out how he’s going to go to college and play QB. And then how he wants to be drafted by the Packers or 49ers.

Much to our chagrin, all of that came true. And he got drafted by the 49ers, only to torment the Packers…

Which he will probably do for all time. 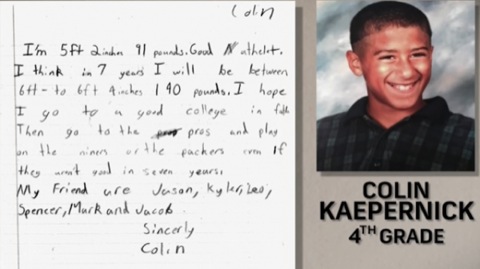