Richard Sherman’s Post-Game Interview is Worth Another Look 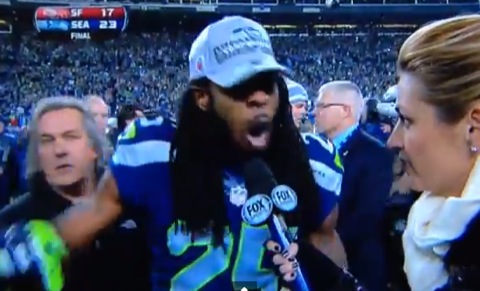 So, the Seattle Seahawks beat the San Francisco 49ers in the NFC championship game on Sunday. The game was ultimately won with under one minute left. 49ers QB Colin Kaepernick lofted a pass to Michael Crabtree in the end zone. It was tipped by Richard Sherman, or as I like to call him DICK Sherman, and picked by linebacker Malcolm Smith.

Look, first of all, Sherman is one of, if not the best cornerback in the NFL.

Second, fuck the 49ers, King Dick Jim Harbaugh, Colin Kaepernick and his long, gazelle-like strides and everything else about those scumbags. The Vikings they are not. The Bears they are not. No. 3 on that list, they are.

Third, The Legion of Boom. That’s what Seattle’s secondary calls themselves. You know who gives a nickname to themselves? Someone who isn’t liked enough to have another party give them a nickname. Remember when George Costanza tried to give himself the nickname T-bone?

“We’re such a bunch of douchy fucks that no one likes us enough to give us a nickname. Let’s just give one to ourselves! Yeah, great idea, fellow doucher!”

History will remember one of those bands. It won’t be the one that includes DICK Sherman.

All that being said, the Seachickens are going to the Super Bowl, which they’ve never won. And good for them! Better them than King Dick Harbaugh & Co.

Anyway, after the game, DICK Sherman had something to say about that last play. In essence, you don’t throw on DICK Sherman, especially to a punk-ass bitch like Michael Crabtree (and we might add, with a bitch-ass throw like media darling Colin Kaep tossed).

Please tell me more about Colin Kaepernick, media! Please! I must have you inflate his statistics and accomplishments more! PLEEEEEEEASE!

Yeah, so, Erin Andrews did the “interview.” She wasn’t expecting what Sherman unleashed, which is part of the comedy. The other part is Sherman calling Crabtree a sorry receiver.

A clearly thrown-off Andrews tries to ask a follow-up, which Sherman unleashes another short tirade on. Then, Andrews starts with a third question and abruptly stops.

Either Sherman just walked off — which would be appropriate, since he obviously just authored his magnum opus. Drop the mic, exit stage left.

Elvis has left the building.

Or, someone got in Andrews’ ear and told her to cut the interview. In which case, FOX got frightened!

“This angry negro is not appropriate for our audience! Stop the madness!”

Whichever it was, awesome!

Rock on with your bad self, Richard Sherman! You’re a total fucking dick, but we’re giving you props for this badass interview!

Previous Article
Green Bay Packers Fans Are Everywhere!
Next Article
Seven Packers Backups Who Could Compete for a Starting Spot