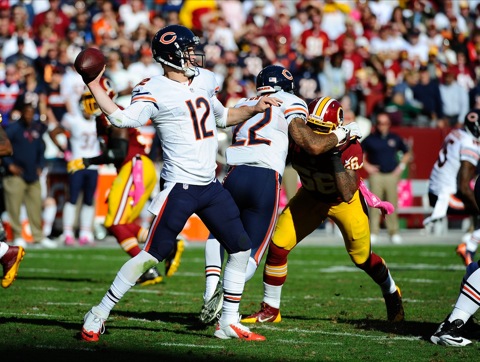 Green Bay Packers general manager Ted Thompson got ripped apart for not having a viable backup quarterback on the roster after QB1, Aaron Rodgers, went down this season.

At the time, Thompson essentially said he didn’t want to sign a good backup because he thought it would jinx Rodgers. Well, good fucking plan, Big Ted.

The Packers were able to tread water after they signed Matt Flynn during the season. Before that, the coaching staff talked the hell out of Scott Tolzien and look, that guy does have a big arm. Much bigger than Matty Flynn’s.

He can sling it. He didn’t win a game after Wallace went down with a torn something or other, though. Granted, he only got to start two of them.

So, the Packers enter the offseason with a question at backup to QB1. Matty Flynn is a free agent. Scotty Tolzien is, well, Scotty Tolzien.

You’ll also remember him as the guy who torched the Packers for 272 yards and two TDs in early November.

At the time, we were like, “Yeah, this fucking clown. He can go suck it.”

And then we found out that he’s the best quarterback on the Chicago Bears. What did McCown do last season? Just throw for 1,829 yards, 13 TDs and only one pick in five starts.

So why the hell are you blathering on about this dick, you’re probably wondering?

Well, the topic of the Green Bay Packers’ backup quarterback situation came up on NFL Insiders today. Phil Savage, or maybe one of those other dudes, said, I wouldn’t be surprised if the Packers signed Josh McCown.

McCown is a free agent. The Packers have seen him first-hand. He was the best quarterback on the Chicago Bears last season.

All of that being said, we’re the Green Bay Packers. We don’t sign free agents!