So, Mike Zimmer is Going to Bring a Championship to Minnesota 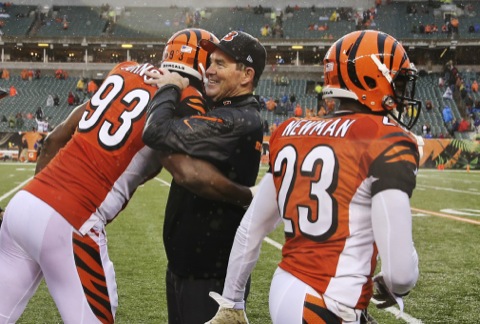 Zimmer proceeded to talk about toughness and physicality. And of course, about how the Vikings are going to win a championship. Here we go!

“I’m determined to bring a championship to Minnesota,” Zimmer said. “I’ve got a chip on my shoulder. I want to make sure that 31 other teams know that I’m here and I’m ready to coach this football team.”

I already dislike this guy. But then, he’s the coach of the Minnesota Vikings, so I would have disliked him even if he were Santa Claus.

Zimmer went on to make us envision a Kumbaya moment where he’s holding hands with the Marx Brothers. I mean, Vikings owners, the Wilf brothers (who also, not surprisingly, happen to be crooks).

“I can’t wait to stand on the podium with Zygi and Mark and Jonathan, and we’re standing on the podium, and we look up and the confetti is falling down on top of us, and we’re all hand in hand, and Commissioner Goodell comes over and hands the Super Bowl trophy to Mr. Wilf and tells him he’s world champion,” Zimmer said. “That is my goal and that is my drive.”

We’re touched. We really are.

Previous Article
Datone Jones Calls His 2013 Season a Success
Next Article
In a Total Surprise, Kevin Greene has Resigned