The Metrodome is Finally Dead! 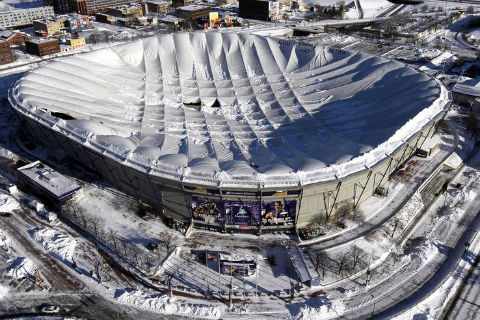 The Metrodome, the turd of a stadium that housed that turd of a team — the Minnesota Vikings — since 1981, is finally dead.

It was deflated on Saturday morning.

This isn’t the first time the Metrodome roof has gone down, however. It collapsed a few years ago. That’s what you’re seeing in the photo above.

The Vikings, after playing two seasons at TCF Bank Stadium — the home to the Golden Gophers, will move into a new piece of crap stadium called the Hormel Chili Dome.

It will feature shrines to the Vikings’ all-time greatest player, Brett Favre, and the Hamm’s Beer Bear.

Anyway, check out the Metrodome deflating, like the hopes of so many Vikings’ seasons before it.