Like Us, Brandon Jacobs Thinks Jim Harbaugh is a Bitch 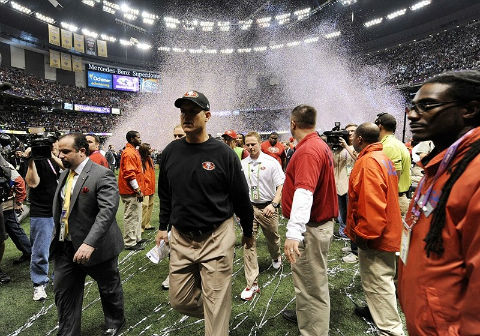 Is there any coach more fun to hate than San Francisco 49ers coach Jim Harbaugh? No. He just makes it so easy.

From the whining and complaining, to the sideline meltdowns, to the smugness, to… well, you get the picture. The guy is a total fucking dick. King Dick, as far as we’re concerned.

Also, a bitch. Just ask former 49ers running back Brandon Jacobs. Jacobs was signed as a free agent prior to the 2012 season. He hardly played and was eventually released. Jacobs returned to the Giants, the team he started his career with, this past season.

Even though he got out of a situation where he barely saw the field, there’s no love lost for Harbaugh.

During an interview with WFAN’s Boomer and Carton, Jacobs had this to say about Harbaugh.

Then, toward the end, Jacobs was specifically asked about Harbaugh being a bitch.

“It’s not was. He is a bitch, and that’s why he’s never won anything.”

Anyway, we always love when someone rips that prick apart. Well done, sir!

Alex Van Pelt Could Be Latest Packers Assistant to Leave