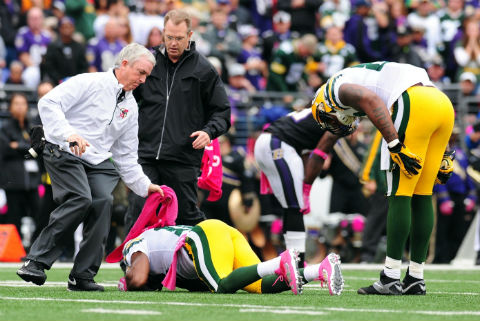 You know how the Green Bay Packers are always down like 17 guys at any point during the regular season? Well, Rick Gosselin has gone and counted up all of the games missed by starters because of injury.

Interestingly, two of the teams ahead of Green Bay were also playoff teams. Of course, neither of them lost their franchise quarterback for any games and therefore had much better records than the Packers.

The Packers’ two season NFL-leading total of starters’  games lost to injury is 153. But you already knew there’s an injury epidemic in Green Bay. Especially when it comes to pulled hammys…

We’ll break this down a little further. Here are the number of games missed by the Packers starters or projected starters.

Imagine if the Packers only lost 20 games by starters to injury like the New York Jets did this year.

Some things, like the broken bones Rodgers, Matthews and Cobb suffered happen on freak plays, but feel free to sound off on the training staff.