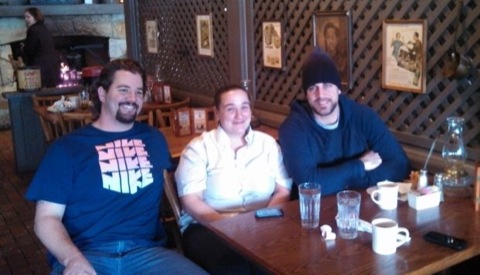 Green Bay Packers quarterback Aaron Rodgers and center  Brett Goode were apparently in Bloomington, Illinois last week, on their way to some hunting trip in Arkansas.

Note: A couple readers pointed out that it’s Brett Goode in the photo and not EDS, as was reported by the paper in Bloomington. We just assumed that a supposedly reputable news organization would have actually asked the guy’s name. Either way, dude has a sweet man perm and mullet.

They stopped to eat at Cracker Barrel, which Rodgers admitted is his favorite… at least in Bloomington, which isn’t exactly known for its culinary scene.

The moment word spread that Rodgers was back and ordering his usual — Grandpa’s Breakfast, Packers’ fans — like Cracker Barrel cook Dawn Nettleton — quickly ventured out to get a glimpse. Rodgers and Dietrich-Smith were “highly hospitable,” posing for pictures.

Aaron Rodgers — man of the people.

It’s also 1750 calories. That will take you a little while to work off. 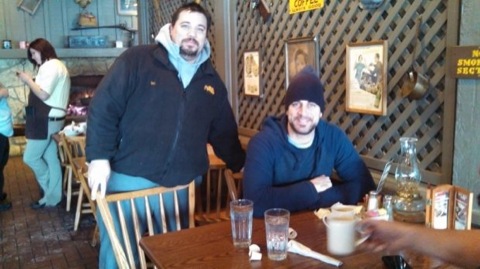