You Won’t Have Jerron McMillian to Kick Around Anymore

by Monty McMahon
in Uncategorized
67 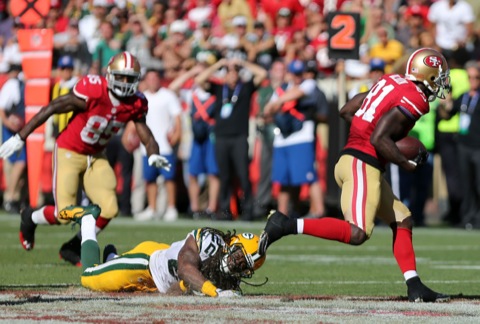 The Green Bay Packers have cut the cord on safety Jerron McMillian, releasing the 2012 fourth-round draft pick on Tuesday.

The move was necessary for the Packers to sign running back Kahlil Bell, who will serve as the Packers’ third back and play special teams.

McMillian is kind of representative of Ted Thompson’s recent drafts — not a lot of production on the field. McMillian split time opposite Morgan Burnett with M.D. Jennings his rookie season.

This season, he pretty much went backwards. McMillian began the season as a starter with Burnett injured. During that time he was responsible for giving up a number of big plays to receivers. When Burnett came back McMillian went back to splitting time with Jennings. That time was most noteworthy for the number of missed tackles he had.

Eventually, the Packers started using undrafted rookie Chris Banjo ahead of McMillian and the only time he saw the field was on special teams.

McMillian had just 15 tackles and no turnover plays this season.

He clearly became expendable when Sean Richardson returned from the physically unable to perform list in week 12.

If you take a look at the Packers 2012 draft class as a whole, it’s a pretty depressing picture. McMillian joins three other players who are no longer with the team — quarterback B.J. Coleman, tackle Andrew Datko and linebacker Terrell Manning.

Cornerback Casey Hayward was injured most of the season and is now on injured reserve. Defensive tackle Jerel Worthy has played in just one game this season after tearing his ACL late last season.

The only production from that class this season has been from defensive tackle Mike Daniels — in a part-time role — and linebacker Nick Perry.

Daniels has 5.5 sacks. Perry has four sacks and three forced fumbles, although he’s only been healthy enough to play in five games.

Aaron Rodgers Hasn’t Been Cleared Yet