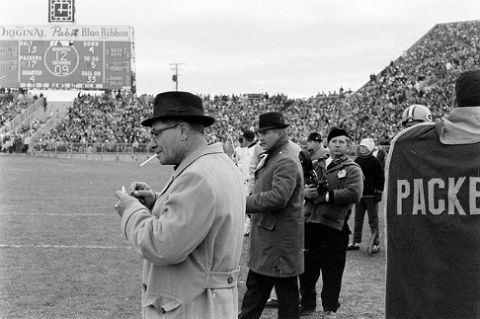 Legendary Green Bay Packers coach Vince Lombardi has had a Broadway show and a documentary. Now he’ll be getting his own movie (maybe).

The picture will be produced by Legendary Pictures, which did the Jackie Robinson biopic 42.

J.C. Chandor is signed on to write and will also probably end up directing, according to Deadline. Chandor wrote and directed All is Lost, starring Robert Redford, and Margin Call, starring Kevin Spacey.

Both films did pretty well critically, so that’s probably something to be excited about.

Chandor has reportedly already started working on the script.

Now, if you think you’ve heard a story like this before, you have. Robert De Niro was supposed to star in a film about Lombardi that his Tribeca Productions would produce. That project was announced in 2009. The script, based on Jerry Kramer’s book Instant Replay, is finished.

But this is the way shit goes in Hollywood. A project gets announced and goes into some black hole somewhere because of one problem or another and sometimes never sees the light of day.

Here’s the thing not to be excited about with the latter picture. De Niro is reportedly out as an actor and they’re now looking at John Travolta to star.

You Won’t Have Jerron McMillian to Kick Around Anymore