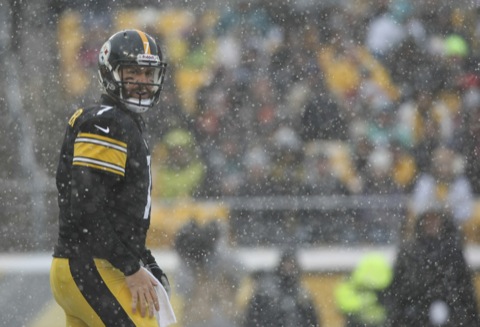 Once again Packers Nation is relying on Matt Flynn, a declining defense and a mixed bag special teams unit to keep alive their playoff aspirations for another week.

If past performance is truly the best predictor of future performance, then we should expect the Packers to be down at halftime, pushed to the brink, and then to rally for a one-point victory in the second half.

Standing in the way of that scenario is a Pittsburgh Steelers team with several elements to suggest they can avoid that fate.

For one, the Steelers won’t be bothered by the cold or the snow. It is 27 degrees in Green Bay as I write this, which is balmy compared to last week. Snow is piled everywhere and an even bigger snowstorm is expected tonight and into early tomorrow. Regardless, the Steelers are practically built for poor weather. Though they are not as good at it as they have been in prior years, the Steelers still like to run the ball and stop the run. At the same time, they have an old-school quarterback who doesn’t need ideal conditions to play well.

The Steelers probably most importantly have a much better defense than either of the ones the Packers came from behind to beat in the last two weeks.

The Steelers have to keep winning to keep their very slim playoff hopes alive. So, essentially this is a playoff game for both teams.

On the Packers side, Matt Flynn have never lost a game at Lambeau Field that he played in, being 2-0-1. He also played well in similar conditions in 2011 against Detroit and in colder conditions at Lambeau just two weeks ago. So, we know Matt Flynn, southern boy that he is, can play in the conditions we are likely to see. If he can play a game similar to the one against Atlanta then, with the help of Eddie Lacy, the Packers should be able to stay close in this one.

That means the really big question is the defense and how much resistance they are going to offer. Can they stop the run? Can they get after Ben Roethlisberger enough for him to have one of the clunker games he is capable of? Who knows?

Monty: The Pittsburgh Steelers are one of those teams. Can beat anyone. Can get beat by anyone. Of course, so are the Green Bay Packers.

So which epitome of NFL mediocrity comes through on Sunday? Good question.

One positive for the Packers is the Steelers are 2-5 on the road this season. Their road wins came against the New York Jets and  Cleveland Browns. And let’s be honest. Neither of those teams are any good, particularly on offense.

The Packers, at least lately, are good on offense. That being said, both the Jets and Browns have defenses that are far, far superior to the shit show that is the Packers defense.

The good news is the Steelers haven’t been successful running the ball this season and the Packers biggest weakness is clearly stopping the run. The Steelers are 31st in the league in rushing yards and their back, Le’veon Bell, is averaging just 3.3 per carry.

Don’t be surprised if the Packers’ run defense actually looks serviceable on Sunday. I mean, don’t get confused about those guys actually being good. It’s just that the Steelers are bad running the ball.

The guys the Packers must stop are quarterback Ben Roethlisberger and receiver Antonio Brown. The Packers should be able to generate pressure on the QB, since the Steelers line is terrible. And as long as he doesn’t end up one-on-one with one of the Packers’ awful safeties, they should be able to contain Brown. Sam Shields and Tramon Williams should take care of that.

What this is going to come down to is if Matt Flynn and the offense can move the ball.

I say they can and will.

And guess who has one of the hottest backs in the NFL? The Green Bay Packers. Eddie Lacy. Bull.

Lacy will bruise the Steelers. That will open up the pass. The defense will remain awful, but be good enough on this day.

The win will set up a huge week 17 game in Chicago.