by Shawn
in Uncategorized
34 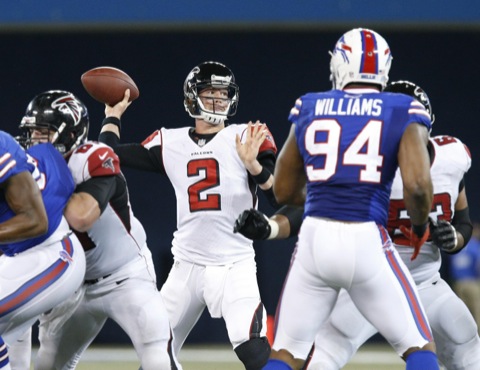 Shawn: In different ways, the Mike Smith Atlanta Falcons and the Mike McCarthy Green Bay Packers both came up together. They declared themselves up-and-coming NFC contenders with playoff losses in 2009, and then they made their case as NFC powers in 2010.

Last season these teams were the No. 1 seed and the No. 3 seed in the NFC. Both had high expectations for this season. Both have gone the other way. Both will have a lot of soul searching to do after this season, which will include contemplating how they can shift the balance of power in the NFC away from the West Coast.

The downfall of both teams is at least in part due to injuries. The Packers’ injuries are what Edgar Allen Poe would call “manifold and multi-form,” and they have been discussed to such an extent that I’m not going to repeat it. The Falcons have had their quarterback, at least, but Matt Ryan is not the kind of elite player who turns average guys into stars. He is completely serviceable when his line is blocking for him, the running game works, and he has weapons on the outside to pass to. Take those three things away, and he’s taking you nowhere.

The Falcons outbid the Packers for the services of Steven Jackson, and Jackson has rewarded the Falcons by being injured virtually the entire season while the Packers “settled” for drafting Eddie Lacy.

That sequence of events could have a big impact on Sunday’s game.

I have at least one rock solid prediction for Sunday — cold. It’s going to be cold, as in 15 degrees with a little 10 mph wind making it feel like it is 5, as in I just got off a plane from Atlanta and what the hell am I doing here cold.

Dome or no dome, if this was the old Falcons, the Falcons that liked to run the football, throw short passes and possess the football, then the cold might have actually helped them. But that team is long gone. This Falcons team likes to spread you out and throw the football. They’ve been miserable running the football and protecting their quarterback, and then when you take away the best weapon in their passing offense — Julio Jones — you have a team that is tied for the worst record in the NFC.

I expect that the Falcons will want to go home shortly after stepping out on the field.

The Packers, on the other hand, have been 50 shades of miserable the last five games and to expect cold weather to improve their play would be insanity. However, the real difference is the opponent, though the Falcons did play better last week. The Falcons have not been good stopping the run, and so I expect the Packers to be able to run the ball some in this game as long as the right side of their line isn’t a complete disaster.

I also expect Matt Flynn to have some time in the pocket to throw, as typically the pass rush is slowed on a cold grass field.

I don’t expect a lot from Flynn, but I expect enough plays when coupled with a decent running game to at least allow the offense to put up 20 points or more.

I expect the Packers’ defense to look better after their rest. I believe they can stop the weak Falcons running attack and hold it beneath 100 yards for the first time in six weeks. I believe the Falcons passing attack can make some plays, but not enough for them to score over 20.

The Falcons’ best chance to score might be in the kicking game, where the Packers have been horrible, and where the cold weather will definitely play a role.

Regardless, I think the Packers stay alive one more week.

I’ll be at the game and hoping for some snow so we can at least get some ambience. Though I typically attend a Packers game every season, I have not attended a loss at Lambeau Field since 2004 against Jacksonville, which was also a bitter cold game against a southern team. That game Robert Ferguson was laid out and probably never the same, and the Packers fumbled their way to a loss. If the Packers lose the turnover battle in this one, they’ll suffer the same fate.

Monty: This was supposed to be one of the marquee match ups of the NFL season. It was also supposed to be the Sunday night game this week, but the NFL flexed it right back to noon. That should tell you all you need to know about the Atlanta Falcons and Green Bay Packers.

They haven’t lived up to expectations.

The Falcons offensive line has been bad. So I’m expecting the Packers pass rush to generate some pressure this week. I’m also expected the defense to at least look serviceable against the run — something they haven’t done since the beginning of the season.

For the Falcons, it’s going to be all up to Matt Ryan. If the Packers can not let Roddy White and Tony Gonzalez run totally wild, they should be just fine.

Not pretty, but good enough.