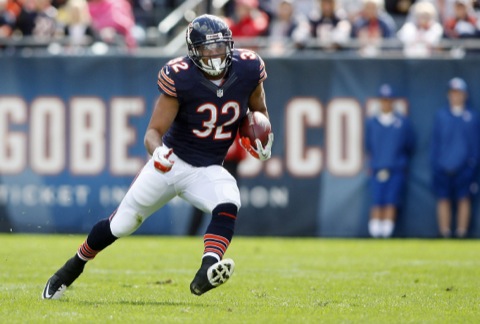 Kahlil Bell probably isn’t a familiar name, but the Green Bay Packers signed the running back on Monday.

Yes, a running back.

Why would the Packers need another running back? Well, they probably don’t, with Eddie Lacy dominating the carries and James Starks the obvious No. 2.

The Packers did, however, put their third running back — Johnathan Franklin — on injured reserve last week. Then, instead of signing another running back, they promoted linebacker Victor Aiyewa from the practice squad.

Now the Packers have another third-string running back who isn’t going to get any carries. Franklin had a 100-yard game against Cincinnati and then got six more total carries before he was shut down prior to last week’s debacle.

So, clearly this was a need.

Bell will clearly occupy an important spot on the bench for a losing team that has no direction.

Ironically, Bell has one career 100-yard game. Who did it come against? Why, the Green Bay Packers, of course!

On Christmas in 2011, Bell racked up 121 yards against the Packers.

Bell hasn’t played in the league this year, but he spent most of his career — two-plus seasons — with the Chicago Bears. He was also briefly with the New York Jets in 2012.

His best season was 2011, when he rushed for 337 yards. While that may look like jack shit, he has averaged 4.3 per carry over his career. Probably largely thanks to the Packers.