Green Bay Packers Blow It in Loss to Pittsburgh Steelers 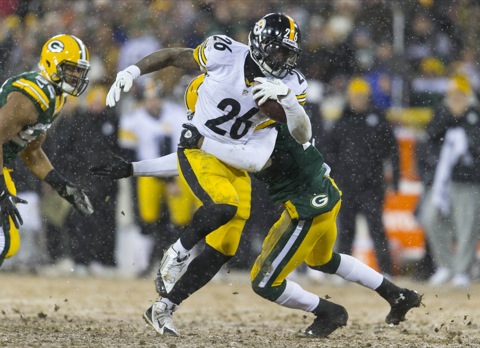 They held their fate in their hands entering the game, but the Green Bay Packers were too inept to do anything about that in a 38-31 loss to the Pittsburgh Steelers on Sunday.

The Packers had a chance in the end to tie the game, but Matt Flynn failed to look at a wide open Jordy Nelson in the end zone. Instead, he chucked an overthrown pass to a well-covered Jarrett Boykin that went incomplete.

And let’s discuss that final sequence right up front.

The Packers were inside the Steelers’ 10 with 10 seconds to go. You can get off two plays, right.

Nope. Not if you’re the Green Bay Fucking Packers.

At any rate, the Packers were doomed by the same thing they’ve been doomed by all season. A really shitty, lackluster defense.

Let’s be honest. Matt Flynn went out on the field and looked like a backup quarterback for most of the day. We can’t begin to count the times he threw the ball nowhere near a receiver.

That being said, Flynn put up enough points that the Packers, or any team, should have won this game.

Except most teams don’t have the Packers defense. That unit is a flat-out embarrassment.

Inside linebackers? Terrible. Defensive line? Awful. Safeties? Shouldn’t even be playing in the NFL for any team.

The Packers let Le’Veon Bell run for 124 yards on 26 carries. That’s 4.8 yards per carry. And why should this surprise you?

Well, because Le’Veon Bell has averaged only 3.3 yards per carry all season, prior to this game. But hey, he was facing the Packers defense. They’ll make any running back look like a superstar!

We might be overlooking that and talking about a Packers’ win if it weren’t for Flynn’s two turnovers.

Flynn threw a pick six in the third and fumbled in the fourth. Those plays changed the course of the game.

Still, despite how awful their defense is, the Packers were still in the game at the end. It didn’t matter, though.

This loss more or less sums up the season.

Would the Packers have won if Aaron Rodgers played? Probably by 20. But Big Ted wouldn’t let that happen. Because he needs some more high draft picks to waste on guys that will never contribute.