Is Eddie Lacy the Rookie of the Year? 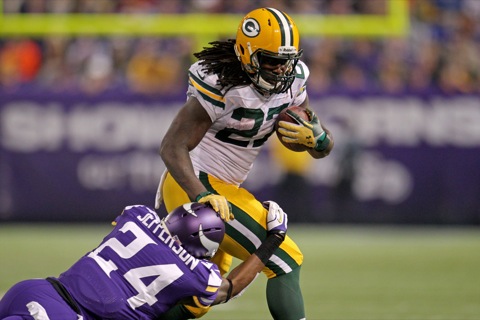 Yes, you’re probably thinking, but Green Bay Packers running back Eddie Lacy will have some competition for rookie of the year. So, as we’re wont to do, let’s go to the stats.

Here are Lacy’s numbers and his competition.

Lacy: 1,028 yards rushing, 4.1 per carry, 8 touchdowns, 236 receiving yards
After Sunday’s performance — 141 yards and the game-winning touchdown — Lacy put himself at the head of the rookie class. He’s the only rookie back that’s been a workhorse for his team and the focal point of the offense for most of the season. When you consider that he’s played much of the year without Aaron Rodgers and has still gained yards, his resume looks even more impressive.

San Diego Chargers wide receiver Keenan Allen: 63 catches, 931 yards, 7 touchdowns
Allen has to be Lacy’s main competition for the award right now. He’s developed into Philip Rivers’ top target and seems like a lock to go over 1,000 yards on the season. When the Chargers beat Denver last Thursday, the clowns in the booth were saying Allen was a lock to win the award. Well, we’re saying not so fast.

Cincinnati Bengals running back Giovani Bernard: 653 yards rushing, 4.5 per carry, 5 touchdowns, 416 yards receiving, 3 touchdowns
The numbers aren’t as impressive for Bernard as they are for Lacy, but he’s been a dynamic weapon for the Bengals. If he wasn’t splitting carries with BenJarvus Green Ellis, he’d have better numbers and probably a better shot at this award. Clearly, he plays a bigger role in the passing game than Lacy does.

Tampa Bay Buccaneers quarterback Mike Glennon: 2,231 yards (in 11 games), 17 touchdowns, 8 interceptions
Three weeks ago, Glennon was gaining momentum in this conversation. Then he started struggling. Over the past three weeks, Glennon has put up 449 total passing yards, 4 touchdowns and 5 interceptions. That’s playing yourself out of the discussion for postseason awards.

New York Jets defensive tackle Sheldon Richardson: 70 tackles, 3.5 sacks, 1 forced fumble
Richardson has been a beast for the Jets this season. Fortunately for Lacy, the NFL hands out an offensive and a defensive rookie of the year honor. Richardson will be strong contender for the latter. We threw him in here because other organizations like to hand out awards too and don’t always split them up.

Buffalo Bills linebacker Kiko Alonzo: 137 tackles, 2 sacks, 1 forced fumble, 2 fumble recoveries, 4 interceptions
Alonzo has a pretty impressive stat line and we know from last year, voters like linebackers who fill up the stat line. The three top vote getters for the defensive rookie of the year award in 2012 were linebackers. Packers cornerback Casey Hayward and his six interceptions finished fourth.