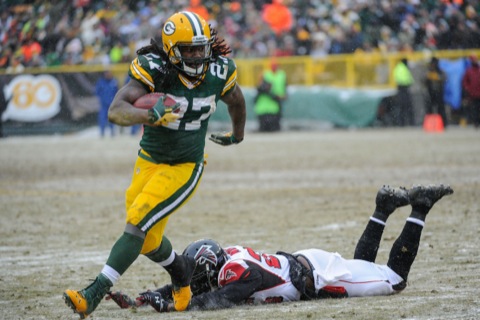 Green Bay Packers running back Eddie Lacy had a decent game on Sunday, rushing for 65 yards, but he wasn’t his usual self. That’s probably because Lacy injured his ankle on the final play of the first half.

The injury occurred on a meaningless run. Coach Mike McCarthy decided to hand the ball to Lacy with a few seconds left in the half to essentially run out the clock.

The run got one yard and the Packers went to the locker room with their feature back banged up.

Lacy would return to the lineup after two series off, but he wasn’t the same.

In hindsight, it seems like a pretty stupid decision. Why not just kneel down if you’re trying to run out the clock? No one gets hurt.

At any rate, the fact that Lacy came back into the game is a good sign that this shouldn’t be a long-term issue.

Five More Thoughts on Packers Win Over the Falcons

Five More Thoughts on Packers Win Over the Falcons