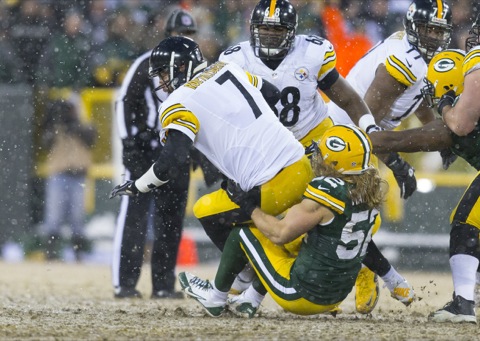 Clay Matthews injured his thumb in the second quarter of Sunday’s game and didn’t return. He probably won’t be returning for a while.

Matthews, who broke his thumb on October 6, has reportedly reinjured the digit.

“I couldn’t give you a timeline,” Packers coach Mike McCarthy said, “but I think based off the history of what happened the first time, I’m told it’s similar to [a] repeat injury.”

The injury happened on a sack, just like the first one did. Matthews has 7.5 of those in what has been a pretty lackluster season. The sack was also the 50th of his career.

At any rate, the Packers will likely be without Matthews when they face the Chicago Bears in week 17 for the division title. And that probably means they’ll generate zero pass rush.

Even with Matthews in the lineup, the Packers had only one sack on Sunday.

Nick Perry and Andy Mulumba took turns playing Matthews’ spot on Sunday after he went out. Mulumba had six tackles. Perry had… nothing.