Ahman Green and Ken Ruettgers Will Go Into Packers Hall 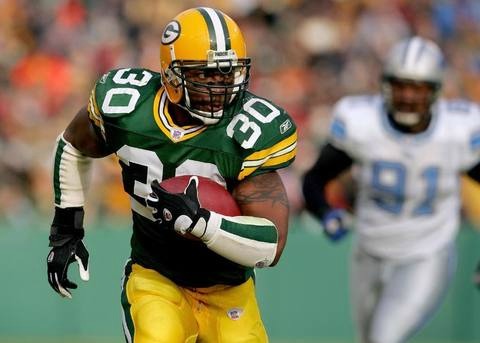 The Green Bay Packers Hall of Fame has announced its next class of inductees. They are running back Ahman Green and tackle Ken Ruettgers.

Green is an obvious choice since he’s the Packers’ all-time leading rusher with 8,322 yards. Green had six 1,000-yard seasons for the Packers. He was a four-time Pro Bowler and also authored the single best rushing season in Packers history, with 1,883 yards in 2003.

Ruettgers probably isn’t such an obvious selection to most of you.

That’s because he played much of his career in the 1980s, when the Packers were pretty much terrible.

He came to the Packers as a first-round pick in 1985 and held down the left tackle spot from 1986 to 1995. Ruettgers never earned a Pro Bowl nod, but he was pretty much the team’s most consistent lineman during that period.

Not really an overwhelming selection, but we’re guessing Brett Favre probably turned the board of directors down again.

In any case, Green clearly belongs.

He beat the team’s long-standing all-time rushing mark in 2009. The previous mark was held by the legendary Jim Taylor. Perhaps appropriately, both backs averaged 4.5 per carry. However, Ahman averaged more yards per game — 80 to 69.6.

On another note, I always love bringing up the fact that the Packers absolutely fleeced the Seattle Seahawks when they sent cornerback Fred Vinson to them in exchange for Green.

Vinson never played a game for Seattle because of injuries. Green, obviously, is a Packers legend.