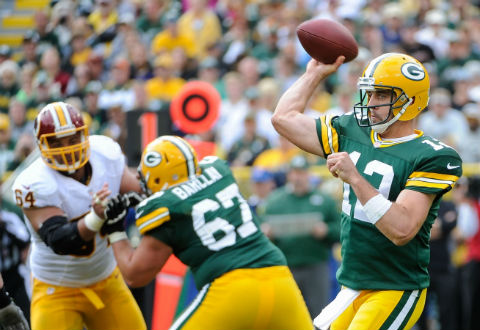 Well, it appears our dreams of watching Aaron Rodgers quarterback the Green Bay Packers against the Dallas Cowboys this week will come down to a decision by the team doctor on Wednesday.

It almost seemed like a foregone conclusion that Rodgers would suit up this week after missing more than a month with a fractured collarbone. Well, not so fast.

McCarthy went on to say that Rodgers is getting closer.

“Rodgers is progressing. The biggest thing is strength and comfort. He felt better on Friday than Wednesday. He made some progress last week.”

In the meantime, the Packers are preparing as if Matt Flynn will be the starter again.

Flynn was good enough against Atlanta, throwing for 258 yards and a touchdown. Atlanta isn’t very good, though. Are the Cowboys?

Well, not on defense. They let Bears quarterback Josh McCown throw for 348 yards and four touchdowns on Monday night. The Bears punted zero times in that game.

Dallas is a league-worst 32nd in pass defense.

So maybe it doesn’t matter who’s playing quarterback against the Cowboys.