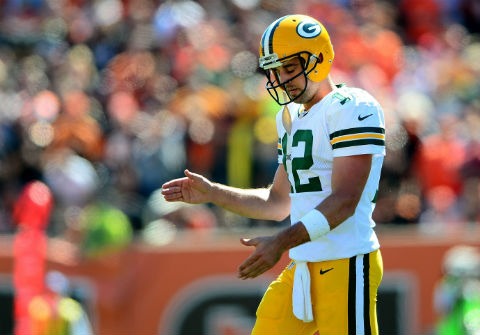 Well, it just keeps getting worse when it comes to Green Bay Packers quarterback Aaron Rodgers.

We know he wants to play, but he admitted today that he felt pain when he practiced last week. That translated into another week on the sidelines.

“I’m obviously trying to push it to come back before science tells you is even possible,” Rodgers said. “I don’t think you’re seeing anybody out there coming back at four or five weeks from this type of injury to do some of the things I’d like to do back on the field. It’s tough to not be out there with the guys.”

Ultimately, Rodgers’ fractured collarbone will be evaluated by the Packers team doctor on Wednesday.

He should be able to do more in practice this week than he did last week, but obviously is no certainty to play on Sunday.

The Packers will prep Matt Flynn to start in the meantime.

It’s starting to sound like Rodgers, like us, is beginning to wonder if he’ll play at all again this season.