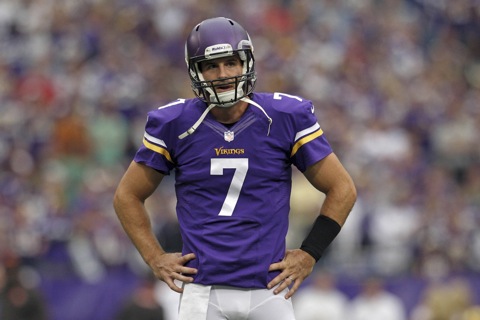 Shawn: Anyone interested in top flight football should steer clear this week as the swiss cheese Green Bay Packers take on the sad sack Minnesota Vikings.

The Packers have finally found an opponent whose quarterback is just as bad as theirs, or worse, and whose defense has just as many holes.

I expect the Vikings to stick with the now familiar game plan — run the football, throw conservatively, play it safe, get the lead and force the Packers offense to win the game.

It concerns me that the Packers are beginning to struggle against the run, and now Adrian Peterson comes to town. However, what doesn’t concern me is that Chistian Ponder has been absolutely terrible at Lambeau Field, and anyone anywhere near these parts knows it is going to be COLD tomorrow — cold, and likely windy.

Even with the injuries being what they are, I still think adverse conditions help the Packers more than the Vikings.

I think the Packers get their running game going a little this week, and Scott Tolzien should take another step forward. If Tolzien can convert around 40 percent on third down and keep his interceptions at one or less, the Packers should be able to win this one, which will keep them alive in the division for at least one more week.

Monty: As shitty as this game is, it should have been on Thursday Night Football. Isn’t that where the NFL puts all of its shitty games?

Green Bay Packers vs. Minnesota Vikings. Can’t remember the last time I wasn’t excited about that matchup. However, the Packers have managed to make me not excited about it this year.

And Greg Jennings is coming back to town. So I should at least be fired up for that clown to eat a fat dick.

Instead, my excitement level is kind of like the Packers’ play and sense of urgency.

Anyway, these two shitty teams are going to play nonetheless and somehow, one of them will win the game. Frankly, if it’s the Vikings, I’ll jump off the goddam 110 overpass like Tony Scott did.

It’s true that the Packers are awful on defense. Like, not historically awful like they were in 2011, but just regular old awful. Not fundamentally sound awful. How do guys make it to the NFL who aren’t able to tackle or cover? I really have no idea. Maybe because Ted Thompson evaluates them?

Anyway, all of those guys play for the Packers, except for the ones who are on the Jaguars.

Fortunately, Thompson’s team is facing Rick Speilman’s team and he’s the only guy in the league who can give Big Ted a run at finding guys who suck. I mean, he drafted Christian Ponder, who has proven again and again that he couldn’t lead your Pop Warner team to a victory. And I’m talking about right now, when he’s in his 20s, if he were playing against a bunch of kids who were 8.

No. I’m convinced no one can do that, except maybe a bunch of 8-year-olds.

What he will do is a hell of a lot of nothing — not complete passes, not make plays, not score points — which will allow the Packers to eke out a win.

Meanwhile, Scott Tolzien will do just enough. In fact, he’ll throw for 300 yards because the Vikings secondary is just as bad as Ponder, possibly worse. Even worse than the Packers secondary, if you can believe that.

And somehow the Packers will get into the end zone. Probably in some sort of fluky way — like a swing pass to Andrew Quarless or a Johnathan Franklin run on his only carry of the game.

In any case, expect nothing but sheer excitement.

Jerel Worthy and Sean Richardson Have Been Activated

A Green Bay Packers Tie with the Minnesota Vikings?

A Green Bay Packers Tie with the Minnesota Vikings?