The Minnesota Vikings are Licking Their Chops 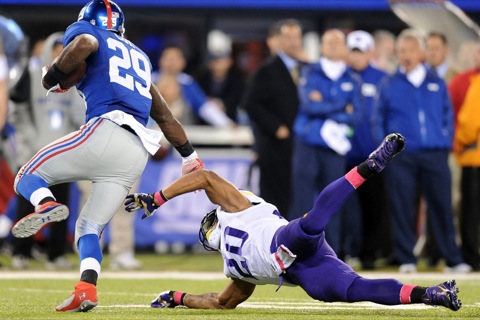 I’d like to just laugh at the Minnesota Vikings, but I can’t because the Green Bay Packers have lost three in a row. Actually, I take that back… hahahahahahahahaha!

They’re still the Vikings. These shitbags are 2-8 and coming to Lambeau Field on Sunday.

Yesterday, Vikings cornerback Chris Cook, who’s been truly awful this season (22 tackles, 0 picks), but is certainly a scholar off the field, made this statement about the Packers.

“They’re definitely vulnerable right now,” Cook said. “[Aaron] Rodgers is a key guy for them and he pretty much makes their offense go.”

Let’s look at some statistics, though.

The Vikings are 29th in the NFL in pass defense. They’re giving up 280 yards per game. So guess what? Whoever the Packers put behind center on Sunday is probably going to throw for 300 yards.

Oh, and how about Minnesota’s quarterbacks? Well, they have three guys who wouldn’t make the Packers practice squad pretending to be NFL starting quarterbacks.

Christian Ponder, Matt Cassell and Josh Freeman — would you take any of those guys over Scott Tolzien or Matt Flynn? I wouldn’t.

The Vikings are 25th in the NFL in passing offense. It actually surprised the hell out of me that they were so high, but then you have to remember that they’re pretty much getting pounded in every game and have to throw the ball a lot in the second half.

Vikings quarterbacks are averaging an impressive 206 yards per game.

Here’s another telling statistic. Vikings quarterbacks have a combined rating of 72.5, which is 29th in the NFL.

Anyway, Cook went on to say Sunday is a must-win game for the Vikings.

Why? So you can make your late-season playoff push?

Previous Article
Packers Pixels: 10 Things You Might Have Missed in the Giants Game
Next Article
Aaron Rodgers is Throwing, but Probably Not Playing Anytime Soon