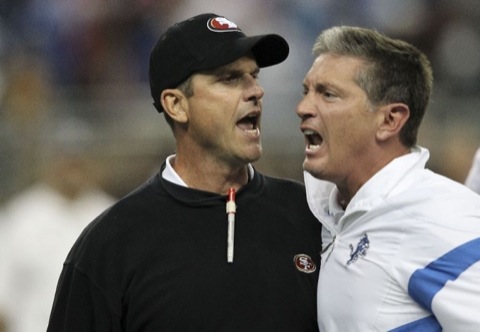 Now we’re talkin’! We have long known and long stated what a bunch of scumbags the Detroit Lions are. Unfortunately, their scumbagginesss gets overlooked because they’re always fucking awful.

Well, no more! The Lions are moderately good — some might say slightly above average — this season. And Green Bay Packers left guard Josh Sitton is happy to point out what a bunch of turds the Lions are.

He pointed the finger exactly where it deserves to be pointed. At the moron running the organization, head coach Jim Schwartz.

Sitton was asked if the Lions would attempt to injure Aaron Rodgers if he were playing in Thursday’s game.

“Absolutely,” Sitton said. “They go after quarterbacks. Their entire defense takes cheap shots all the time. That’s what they do, that’s who they are. They’re a bunch of dirtbags or scumbags. That’s how they play. That’s how they’re coached.

“That starts with their frickin’ coach. The head coach, Schwartz, he’s a (expletive), too. I wouldn’t want to play for him. It starts with him and their D-coordinator and D-line coach. They’re all just scumbags and so is the D-line.”

Anyway, Sitton is absolutely right. Those clowns couldn’t be any bigger bunch of scumbags if they played for the Minnesota Vikings. Well, actually, they probably could, but you get my point…

When Ndamukong Suh isn’t taking a cheap shot at someone, Dominic Raiola is taunting college kids.

Aaron Rodgers is Back, but Won’t Be Playing Thursday