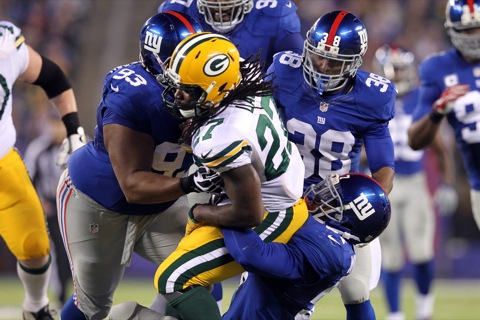 New York Giants 27, Green Bay Packers 13. It was another disappointing loss for the Packers, who are not only suffering from the loss of Aaron Rodgers, but the continued poor play of the defense.

If there’s any good news, it’s this. The Packers are 5-5 and they’re still only one game behind the Chicago Bears and Detroit Lions, who share the NFC North lead at 6-4.

If there’s anything else to stop you from jumping off a bridge, it’s that the hapless Minnesota Vikings come to town this week. In the meantime, here are five more thoughts on Sunday’s debacle.

Play calling is a problem
We’re going to stop harping on the stupid call that turned into the Jason Pierre-Paul pick six for a second. The play calling as a whole was a problem on Sunday. Coach Mike McCarthy admitted as much after the game. During the game, the Giants were stacking the box to stop Eddie Lacy. They were successful, as Lacy averaged only 1.9 yards per carry. When the opposing team gears up to stop the run, you run play action. Does anyone remember seeing any play action on Sunday? If the Packers ran it, they didn’t do it very often. We said it before the game, the Packers would have to use the pass to set up the run. They clearly didn’t do that on Sunday.

You never know which Mason Crosby is going to show up
Last week, Crosby missed two very makable field goals on his way to a 2-for-4 day. On Sunday, Crosby went 2-for-2, including a 57-yarder at the end of the half that cut the Giants’ lead to four. What are the Packers going to get from this guy week-to-week? I think it’s safe to say no one knows.

Remember when the Packers were virtually guaranteed a positive turnover differential?
That seems like a distant memory. The Packers currently have a -6 turnover differential. Only three teams in the league have a worse differential. The problem is two-fold. This Packers defense can’t create turnovers. The Packers have just four interceptions on the season, which is the lowest total in the league. Their nine total takeaways are second worst. The other issue is no Aaron Rodgers. In the past two weeks, Scott Tolzien has thrown five interceptions. Rodgers had just four in the eight games he’s played in this season.

You’re getting Brad Jones, whether you like it or not
Did you see all the plays Jamari Lattimore made on Sunday? No? Oh, that’s because he wasn’t on the field. The Packers went with Brad Jones for the entire game, unlike previous weeks. Jones turned in an uneven performance. On the positive side, he had a team-leading 13 tackles, including three for loss, and a sack. On the negative side, he got ran over and missed tackles on at least a couple occasions. Are we saying Lattimore would have played better? Well, we’ll never know.

The defensive line is going backwards
Mike Daniels and C.J. Wilson led all defensive linemen with two tackles a piece on Sunday. Johnny Jolly got hurt and missed a large portion of the game, so at least he has an excuse. B.J. Raji — the supposed $8 million a year man? Didn’t show up on the stat sheet. The same goes for Ryan Pickett. Datone Jones had a QB hit, but that was it. We’re not sure what happened to this unit, which looked like the strength of the team early in the season, but clearly some of these guys are no longer getting the job done.