Five More Thoughts on the Packers Loss to the Bears 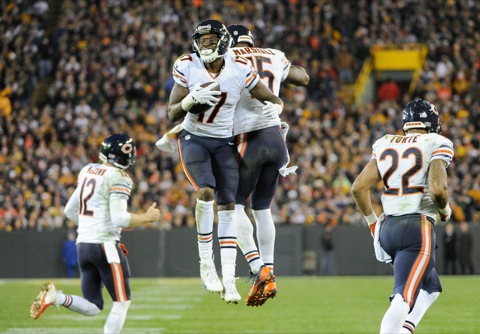 The Green Bay Packers dropped a truly disgusting 27-20 decision to the Chicago Bears on Monday night and lost quarterback Aaron Rodgers in the process.

Maybe the only positive to come out of the game was the continued dominance of the running game behind Eddie Lacy and James Starks. The Packers racked up 199 yards on the ground in the game.

That’s about where it ends and this is where we start ripping the shit out of guys.

The Packers secondary played their worst game of the season.
The secondary was bad early in the year, but that was mainly because Morgan Burnett was out and Jerron McMillian was sucking it up at safety. Now they have their full complement of defensive backs and collectively, they played like shit. Burnett was missing tackles. Tramon Williams was consistently getting beat. Even Casey Hayward looked like shit. Sam Shields had probably his worst game of the season and Davon House and M.D. Jennings had zero highlights. They allowed Bears backup Josh McCown to throw for 272 yards and two touchdowns. Once again, they couldn’t come up with a pick. That’s a recurring theme. Part of the problem here was missed tackles, but the big issue were big receivers. The Bears have three of them in Brandon Marshall, Alshon Jeffery and Martellus Bennett and these assholes couldn’t cover a one of them.

Don Barclay, fuck you.
The Packers right tackle has been awesome as a run blocker and a total disaster as a pass protecter. That showed again on Monday. Barclay made Bears defensive end Shea McClellin look like a perennial All Pro. Shea McClellin is about as close to a perennial All Pro as the shit I took this morning is close to being a filet mignon. McClellin had three sacks on Monday. Guess how many he has this entire season — 3.5. Oh, and guess who took Rodgers down on the hit that broke his clavicle. Don Barclay’s guy, Shea McClellin. It’s time to replace this fuckface in the lineup with Derek Sherrod.

Dom Capers got outcoached by Marc Trestman.
What the fuck were the Packers even doing scheme-wise on defense on Monday? They’re without Clay Matthews and Nick Perry and their plan to generate a pass rush is to rush four and sit back in coverage all night? One sack on the night. The few blitzes the Packers ran didn’t work either. And with more or less zero pressure, McCown was able to sit back and find those big, tall receivers, which was easy with the secondary playing so badly. That’s not to mention Matt Forte gained 125 yards on the ground, while averaging 5.2 per carry. Trestman and his offense had all the answers. Capers had zero of them.

A.J. Hawk, way to regress.
Just when I was starting to come around on this dick, he goes out and shits the bed. Hawk has always been an underachiever, but I actually thought he was playing the best ball of his career this season. He was occasionally looking like the playmaker we’ve always wanted him to be. Not on Monday. Right back to his old self — missing tackles, getting blown by and jumping on piles after the fact. Way to go, dick!

Jamari Lattimore needs to be on the field.
The Packers handed Brad Jones his starting spot at inside linebacker back for this game, even though Lattimore had been killing it in his absence. Now, Lattimore probably wouldn’t have been on special teams and blocked that punt had he been starting. That being said, Jones was, I don’t know, invisible? He somehow got in on three tackles, apparently while I was in the bathroom. In the second half, the Packers decided Jones wasn’t doing anything either and inserted Lattimore. He may not have been spectacular with four tackles, but he played better than Jones. And A.J. Fucking Hawk, for that matter.