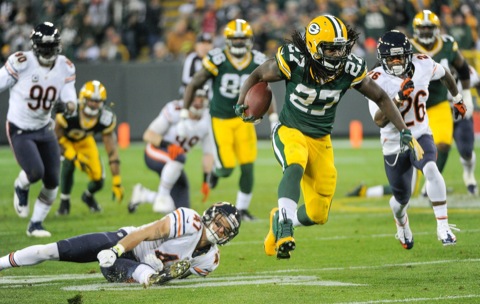 I didn’t notice this during the game, but after Eddie Lacy scored in the third quarter of the Green Bay Packers loss to the Chicago Bears, he and James Starks did a little hand slap/dance thing on the sideline.

Well, apparently that celebration was lifted… from some guys down the road.

Lacy and Starks were doing the same celebration that Wisconsin Badgers running backs James White and Melvin Gordon do after a score. And apparently that little celebration is a big deal in Madison. So much so, that they produced this video about it.

“It was pretty cool. It definitely wasn’t something I was expecting, but I guess it’s gone viral,” White said with a laugh after Tuesday’s practice.

“It was cool watching that, you know, to see the video that we made, but then to see guys in the pros doing it, that was pretty cool,” Gordon said.

Swell. Let’s hope we see some sort of celebrating on Sunday, whether it’s this dance or whatever.