Cullen Jenkins is Still Pissed Off 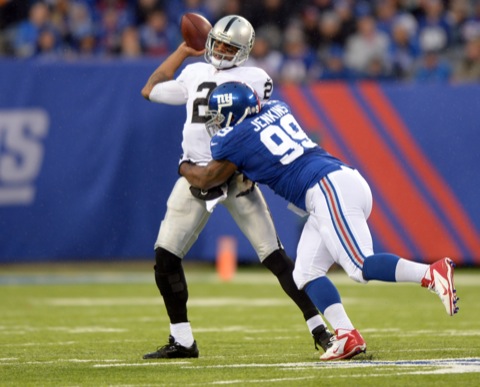 And Cullen Jenkins is still a little pissed off…

He’s pissed off because the Packers — or more accurately, Big Ted — decided Jenkins was too old, too washed-up to continue playing for the Packers after his contract ran out after the 2010 season. Jenkins went out of his way to say he’d give the Packers the old home-town discount. He obviously wanted to stay in Green Bay.

The Packers didn’t bite, even though Jenkins racked up seven sacks during his final season in Green Bay. Granted, he was 30 at the time and we all know Big Ted doesn’t like guys who are on the north side of 30. That’s why the Packers have one of the youngest teams in the league every year.

So Jenkins went and signed with the Eagles, where he had two pretty good years. In 2011, he registered a career-high 40 tackles. He also contributed 9.5 sacks in his two seasons there.

Meanwhile, the Packers struggled to replace the inside pass rush Jenkins provided. They finally, maybe, now have that figured out with Mike Daniels and Datone Jones. Nonetheless, it was widely considered a mistake by Big Ted not to re-sign Jenkins.

And like we said, Jenkins still doesn’t get it.

“It’s just — I don’t know. Any time you play against a team that maybe, you feel like they looked past you or just felt like they could replace you or move on…” Jenkins said. “Whatever the reason is, you kind of have a little feeling in there where you want to prove them wrong and show them you still got it. What better way to do that than if you’re playing against them?”

Now, Jenkins isn’t exactly tearing it up this season. He has 15 tackles, half a sack and a forced fumble. That being said, he can obviously still play and you know he’s coming to play on Sunday.

Jenkins called Sunday’s game “special” and with the Packers depleted offensive line, he just might end up putting up the stats that make it look special on paper.

Regardless, since he didn’t go sign with the Vikings, I think Cullen Jenkins will always be a Packer.