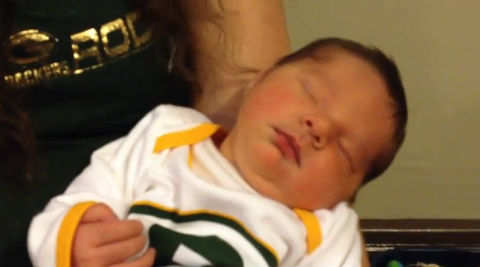 And they named the kid after their favorite QB because of the matching injuries.

His parents dropped the S.

Baby Aaron was born at 12:20 p.m. Sunday at St. Mary’s Hospital Medical Center in Green Bay. He was a couple of weeks early, and his parents had not really settled on a name yet.

But when the nurses discovered the broken left collarbone — on the same side as the quarterback’s injury — the parents did not need long to choose a name. Kyle was the first to suggest it.

Baby Aaron should be healed within a couple weeks, according to his doctor. Unfortunately, big Aaron doesn’t look like he’s returning to the field anytime soon.