The Wisconsin Badgers Are Coming to Lambeau Field 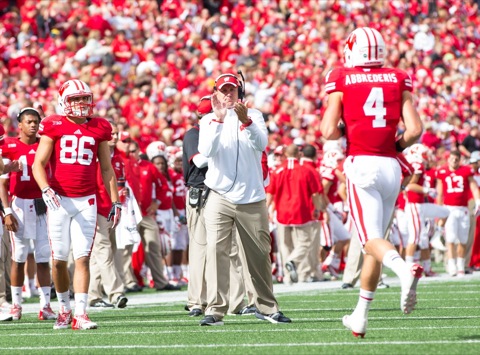 If you’re a Wisconsin Badgers fan and you live in the northwoods it looks like you’re going to be able to watch your favorite college football team in a huge game.

The University of Wisconsin Board of Regents is expected to approve a contract with the Green Bay Packers that will put Wisconsin’s game with perennial power LSU in Lambeau Field. The only problem is, you’ll have to wait about three years for the big game. It’s scheduled for September 3, 2016.

It would be the first ever Badgers game at Lambeau, but such things are not an anomaly in big money college football. Several regular season games have been played at Jerry World in Dallas and Tennessee and Virginia Tech just reached an agreement to play at Bristol Motor Speedway. And those are just a couple examples.

Here’s where it gets interesting for the Packers.

According to Don Walker, UW also gets these bonuses thrown into the package — two complimentary 24-person suites and a minimum of 40,000 tickets.

From that, 300 comped tickets will be given to the players’ families, up to 475 tickets will go to the UW Band, and 7,500 tickets will be made available to students at a rate of at least 40 percent off the lowest price general admission ticket.

The deal should be done on Friday.

Pretty awesome, but wouldn’t it be better if it was Wisconsin vs. Arkansas and former coach Bret Bielema? Of course, that tool will probably be out of a job by 2016.

Reinforcements Could Be Coming For Packers Soon

Well, Casey Hayward Hasn’t Been Ruled Out Yet

Well, Casey Hayward Hasn't Been Ruled Out Yet